Growing up on Long Island and spending many summers at Camp Pontiac, I’ve been used to being the only non-Jew in a given social situation.  However, despite going to more Bar and Bat Mitzvah’s than Sweet 16’s or Quinceaneras, and sitting Shiva more times than going to a funeral Mass, I have always managed to stick out as the Goy. 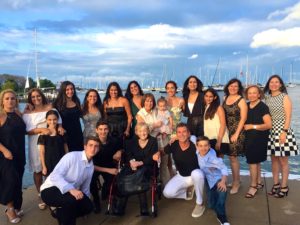 We lived in a Catholic town, but my parents friends all lived in neighboring Jewish towns and so on weekends and for family BBQ’s etc, we would spend our time in Jericho or Great Neck.  Then for summers we would go to a predominantly Jewish camp, Camp Pontiac.  To me the Jewish girls at Camp had
a coolness that was edgier than the preppy WASP types from my hometown.  I remember my first summer looking at all the girls wearing black T-shirts tucked into their jeans with black belts and I thought that was the coolest look ever.  For my entire 7th grade year I tried to recreate this look unsuccessfully with different belts and shirts.  I remember one summer all the Subbie girls at camp were wearing DKNY and so the next summer I made sure my bags were filled with DKNY only to find out everyone had moved on to loving Juicy.

Joining a Jewish family would be easy I told myself.  I went to camp after all. But then as I recalled all my summers there, I had a common memory of people being able to tell I wasn’t Jewish after a few minutes and I could never figure out what gave me away. As I was going down Memory Lane I recalled a recent instance a few weeks ago when I was meeting a friend of Baby Daddy’s for the first time. Within five minutes of conversation he interrupted a story about me doing a flip off boat into the ocean to make the declarative statement: oh she’s not Jewish!  I remember asking Baby Daddy in the car what I do that gives me away all the time.  No matter how much I try to not stand out, I’m always picked out as the Goy!  He muttered something about how most of the girls he grew up with wouldn’t be scaling a yacht in the Caribbean looking for a perch to do flips off of.  But, I countered, most of my friends growing up wouldn’t have done that either!

At a family Bar Mitzvah recently, I learned that I don’t know how to Kvetch.  A bunch of us were sitting at the end of a table, bonding over being the “cool” adults in a crowd of very trendy looking kids.

We’re sitting there and Cousin #1 is talking about her life’s woes and struggles, which sounded tough.  I am sitting there nodding sympathetically and listening.  Cousin #2 interrupts to say: “No no Cousin #1, your problems are tough but at least you have all your toenails, I recently lost some toenails”.  I turn to Cousin #2 and offer condolences for her lack of nails.  It is then Cousin #3 takes up and offers consolation to Cousins #1 and 2 by saying: “Look that’s bad, but you could have a unibrow like me, LOOK!”  So I’m sitting there feeling bad for the cousins, also feeling grateful to have my fortunes when I feel an elbow in my rib.  “Tell them how horrible our lives are!!” Baby Daddy urges.

Sorry what? Our bills are paid, I am freshly manicured and pedicured and my mustache is waxed for once too and we’re currently eating authentic Isreali hummus, what’s to complain about? I’m so confused. “Jamie” [editors note, he NEVER uses my real name unless he’s serious] “They’re going to think you’re arrogant and think you’re better than them, tell them something!!” He begged.

Hold the phone, what is happening here? I can’t even make something up, I’m sitting here trying to be a good listener because your family members are going through some terrible things and I want them to feel comfortable sharing!

I see the light bulb go off in his face.  “Babe” he softened, “You need to learn how to kvetch”.

The cousins all perked up.  They then all look at me and start laughing and they took turns explaining that culturally to them you share basically escalating tales of woe in an effort to make the original person with the problem feel better.  Kinda like ok your car broke down but you don’t have cancer type cheering up.  And then like the matrix all these missed-Kvetches I didn’t partake in because I thought I was being a good listener when they wanted a kvetcher!!!!

Jews and anyone dating or married to a Jew are familiar with the term: kvetch, which means to complain.  However, as with most non-English words, that’s not a perfect translation. The kvetch differs from your standard complain as the kvetch is used for social purposes.  You kvetch to bond.  For years the art of kvetching eluded me.  It was one of my “tells” amongst Jews that I was not one of them.

Now I’m a changed woman.  From now on when I identify a kvetch going down, I’m gonna kvetch so hard they’re gonna kvetch about my kvetching!  Happy Kvetching everyone!