I had been warned that pictures with Santa would be different this year because #TheHandful just turned 18 months old. Last year she was only 6 months old, which is a big difference in brain development from 18 months old. At 18 months babies are acutely aware of their sense of agency over their own bodies. This is why “no” is often their favorite new word. They know that when they don’t want to do something that they can use the code word: “No” and that the code word is respected when it comes to things they do and do not want to touch or eat. In my parenting class I learned that it is especially important for parents of daughters to make sure that our daughters are in control of who they touch and kiss etc.

In our house we respect #TheHandful when she doesn’t want to touch someone and allow her to greet them with “Hi” or “Bye” or “Thank You” as is conversationally appropriate. I feel like most people are up to speed on this whole school of thinking because pretty much from educators to caretakers to ice cream shop employees, everyone has really seemed to embrace this concept. I thought I’d have to explain it to a lot more people but everyone’s been like “I’m down for a wave!”

The Santas at The Grove and at the Glendale Americana have certainly been briefed on the new protocol. Actually, they were both super impressive coaches throughout the attempts at pictures. Nowadays you don’t throw your kid on the strange dude’s lap, instead you get a cushy window of time and private few minutes with Santa where he tries to be less scary and you can #stageparent the air out of your lungs.

My teacher warned us that the kids might bug and suggested a drive-by visit of a Santa or Santas before trying to do the real thing. I dismissed this at first because I mean who is gonna wait in those lines for a not-even-photo opp? Pass. Well, shut up me because me is gonna wait in that line.

My sister was about to go out of town and wanted to give #TheHandful some kisses before Thanksgiving. She volunteered to meet at the Grove at do a Santa-Drive-By as she knew that was suggested by my teacher. Well, we get there and first of all get an amazing parking spot and then second of all are first in line … that’s right FIRST in line for the Santa. #TheHandful walks up to the ginormous house shouting “WOWW WOW WOW WOWWWW” and I’m like this is going to be awesome. She and I were side kickin hard in our matching Old Navy shirts and we looked like total cool kids. The Santas don’t use elves these days, they have fancy dressed iPad holding ladies who remember everyone’s name and distract kids with bears and bells and stickers. They took one look at my smiling, talking, cuting girl and promised that we could come back if the pictures didn’t work out. I was like listen this isn’t my first choice for a Santa picture outfit because this was supposed to be a practice meeting of the Santa, but this kid is definitely going to be fine she hasn’t stopped laughing since we got here. I mean I should just tell my inner monologue to shut up from now on because she is always WRONG. Santa waves from his chair (a good 50 ft from us) and beckons #TheHandful to come closer. Homegirl won’t leave the doorway. She stood in the doorway for the allotted time and when I made two attempts to bring her closer she physically fought me screaming “NO STOP MOMMY”. Look, I’m not trying to child abuse here, and I am certainly trying to follow the rules from the class I take every week, so we did the right thing and bailed. Straight up ghosted out of there. Now I know why they suggest a few visits before trying the real thing. My goodness that came out of nowhere.

I recount the story to Baby Daddy who is not surprised that the teacher called it and I was too big headed to believe her. He suggests another practice visit for the day after Thanksgiving. Gammy had just sent us an adorable sweater that said “Happy” on it and it’s #TheHandful’s current favorite sweater because it has lots of colors on the sleeves. #TheHandful has also developed an appreciation for the Tutu and so the sweater and tutu combo was a natural outfit for our second Santa attempt.

This time we went to the Americana in Glendale to see Santa. Locals, the Santas themselves were both excellent, but the set and background at the Americana SMOKED The Grove. If you have the choice head to Glendale the whole scene is prettier and it’s the same price. Staff and Santa were the same at each.

I decided to act like Buddy the Elf and run around the entire Santa-House excited about every little knick-knack, hoping to get #TheHandful excited and not notice her fear. She saw through me immediately and started saying “Bye Bye Danta No No” which is a red light for us and means she wants to go now. But, Baby Daddy, in a stroke of genius, grabs a prop (not even meant to be played with!) bike and says “Mickey Beep Beep!!” 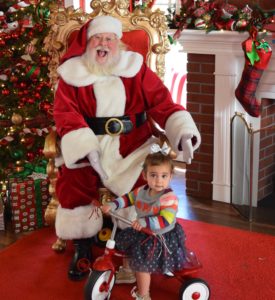 Ladies and gentlemen, the password is “BEEP BEEP”. She happily hops on the bike and lets us push the bike towards Santa. Then #StageDad does his barking noises and SHE GIGGLES AND SMILES!! Click click click – Three usable pictures!! The family picture – we could only
use the first take though because she did not like getting ANY closer to “Danta Ho Ho” (also called “Danta No No”). #StageDad to the rescue!!!

We did the Obama family fist bump and bought the pics! A nice little win for us as a family as we head into the end of a very eventful year.